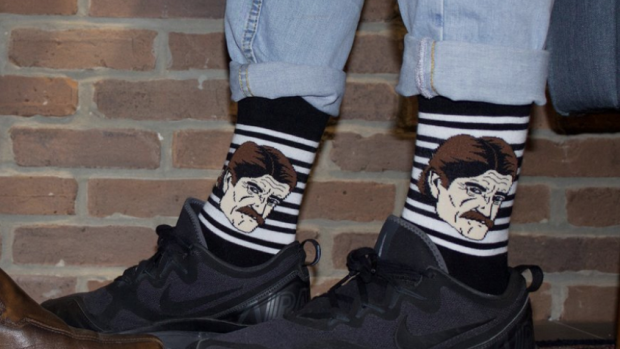 Mike Babcock has become one of the more impactful faces in the Toronto sports community to the point where his mug started appearing on socks.

The Babsocks craze took the city by a storm, and now they’re teaming up with Mr. Mike Babcock himself along with the Greater Toronto Hockey League (GTHL) and Movember to raise funds for mental health awareness in sports.

The company has created their own special Movember edition with the Leafs bench boss sporting a signature Movember muzzy that will be sold at a popshop in downtown Toronto on Richmond Street East.

Do good with your dollar. @Babsocks is opening a pop-up shop at the Mo House. W/ each sock $5 goes to Movember. https://t.co/aZgnSyaCJx pic.twitter.com/M4NBcd93fw

The custom Movember Babsocks can be purchased online or at the shop for $20 a pair. $5 of every sale will go to the Movember Foundation that supports mental health ventures.

The GTHL, which has over 40,000 participants, is the biggest organized hockey league in the world.

Battles on the ice are a regular occurance, but you don’t often see team competing away from it, until now.

The Movember Babsocks will be used as a fundraising mechanism for every team to try and raise the most sock sales possible. Each club will be given a specific coupon for that can be distributed out to whomever. The winning team that sells the most socks will have a practice conducted by Mike Babcock and the Maple Leafs coaching staff. Pavel Barber, who we’ve featured in the past, will give a training session to the second and third place squads.

This is a fantastic endeavour is totally worth supporting. Good on coach Babcock and everyone involved for coming together and making this happen.