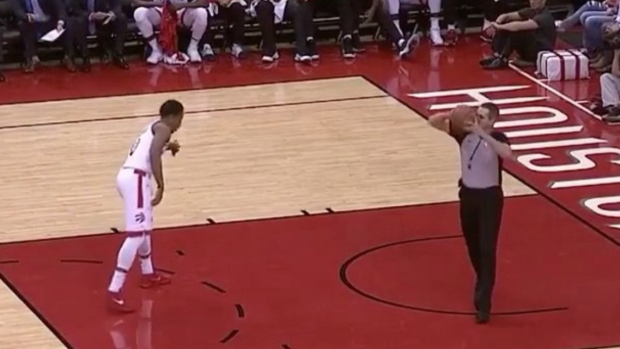 Nobody likes to be left hanging when you offer someone a high-five, but it happens on purpose in the NBA more often than you'd think, but only after a technical free throw.

As most basketball fans know, when a player earns a trip to the charity stripe, under normal circumstances his or her teammates and opponents are right there waiting to rebound the ball and give a high-five to the free throw shooter after a make.

Technical free throws are different, though, and there is nobody to high-five after a make.

As you can see, DeMar DeRozan has no problem dapping air after a make, and he did it once again Tuesday night after doing it against the Pelicans earlier this season.

Not only is this now a fun little ritual, but basketball fans seem to love it!

Ahhh derozan with the air 5’s to his teammates haha

@DeMar_DeRozan with the air high fives. Cracks me up! Haha #RTZ #WeTheNorth

DeRozan air daps are the best

Lmao derozan high fiving the air kills me every time 😂😂

Raptors fans also loved the way the team played against the Rockets as they dominated from start to finish for the win.

.@Raptors put up an NBA-season high 76 first-half points and never look back en route to 129-113 road win over @HoustonRockets. pic.twitter.com/Y4M4deG4Wd