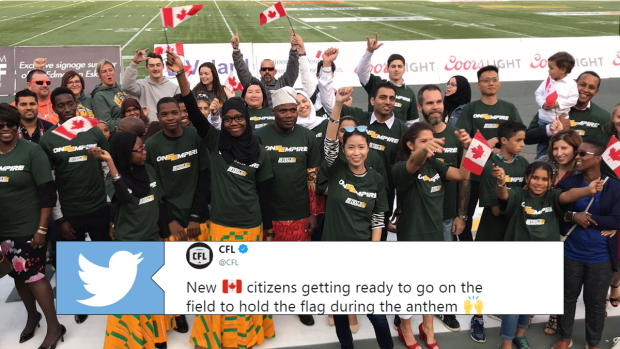 During Weeks 10 and 11 in the CFL, teams are participating in the league’s Diversity is Strength campaign, which aims to celebrate inclusion and people of all backgrounds.

Of course, this includes the Edmonton Eskimos, who, prior to their Saturday night game against the Montreal Alouettes, held a citizenship ceremony for 50 new Canadian citizens coming from 18 different countries. During the singing of the anthem, they were also welcomed on to the field to carry the flag.

We are hosting 50 new 🇨🇦 who are being sworn in as citizens today before the game. #DiversityIsStrength pic.twitter.com/OtI40WrRkD

New 🇨🇦 citizens getting ready to go on the field to hold the flag during the anthem 🙌#DiversityIsStrength #CFLGameday #Esks #AlsMTL pic.twitter.com/QJBxWFmI8O

Initiatives celebrating diversity, such as the CFL’s, have become a meaningful way for sports leagues to offer their symbolic support for individuals. Standing behind Canadian immigrants, and specifically at this moment in a touchy political climate, marks a strong feel-good stance that holds to what many Canadians believe to be one of the core values of their country.

Canada isn’t perfect. But this is a country where many of us are eager to share differences, discuss shared paths forward, and embrace diversity as our strength. Proud to cover to a league attempting to foster more discussion #DiversityIsStrength #CFL @cfl @TSN_Sports 📸 @nelcam pic.twitter.com/zujxVyrq6u

The Eskimos also honoured Hall of Famer Johnny Bright, who in 1959 became the CFL’s first African-American player to win its Most Outstanding Player award, as well as locker room attendant Joey Moss, who, born with Down syndrome, has become a fixture with the Eskimos and Edmonton Oilers since joining both teams in the mid-80s.