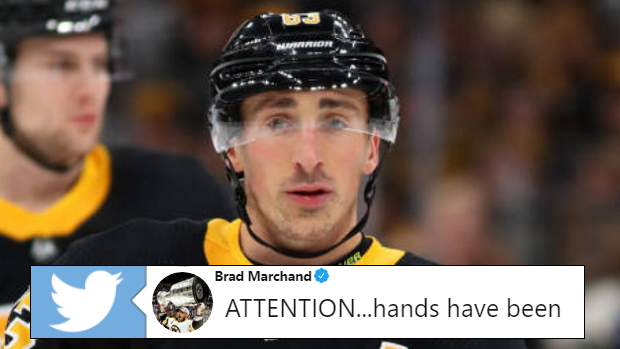 Even Brad Marchand is starting to think he’s lost his soft mitts.

The 31-year-old has just been getting roasted on Twitter this week for literally skating past the puck at centre ice in a must-score shootout attempt against the Flyers on Monday, and whiffing on a breakaway attempt against the Penguins on Thursday. Marchand, who’s never been one to shy away from firing off aggressive tweets of his own, took to the app after his latest gaffe but this time decided to take a shot at…

… himself. We’ve gotta give it to the guy, this is some of his best work to date.

fans are unsurprisingly having a ton of fun with this one.

Are they really lost if you never had them?

I hate you bc I'm a leafs fan but as a hockey fan you're one of the most entertaining guys in the game. 😂

Looks like you got them back last night for the empty netter🏒🚨. 😂😂. #63 is not just a great player, sense of humor is off the charts. Don't ever change Marchy👍🏻

It’s okay marchy we forgive you for the missed breakaway, I will now return your hands

A little self-deprication never hurt anyone, but it’s usually trolls who Marchand tends to target. Like this dude, who he absolutely roasted after making fun of him for his botched attempt against Philly. This should serve as a valuable lesson to NOT mess with #63.