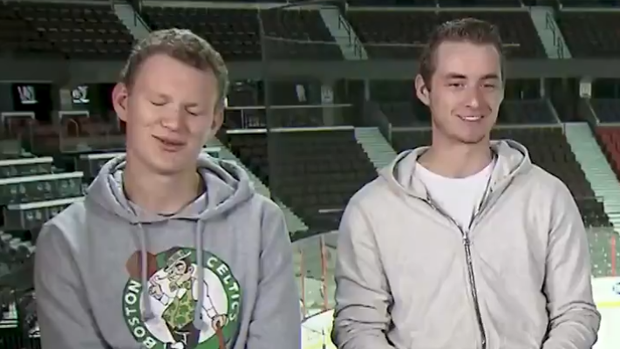 The Senators have fully committed to rebuilding their team for the future and a huge part of that is embracing the young players they have in their system.

Brady Tkachuk, Alex Formenton and Maxime Lajoie are three major parts of the Sens future and they all sat down with Brent Wallace so fans could get to know them a little better. Max Lajoie is one of the lesser known players so he has drummed up a lot noise in after his first NHL game. Wallace decided to ask him about who he texted when he found out he made the team and Tkachuk was not a fan of the answer.

You can watch the full interview with Brent Wallace and the boys on TSN.ca:

MEET THE YOUNG GUNS: Brent Wallace sits down with new #Sens Brady Tkachuk, Alex Formenton and Maxime Lajoie to talk about making the team and play a game of rapid fire to see how well they know the organization and their teammates https://t.co/rqxSyEJITr #TSNHockey #SensOnTSN pic.twitter.com/iuwt9kcrVt