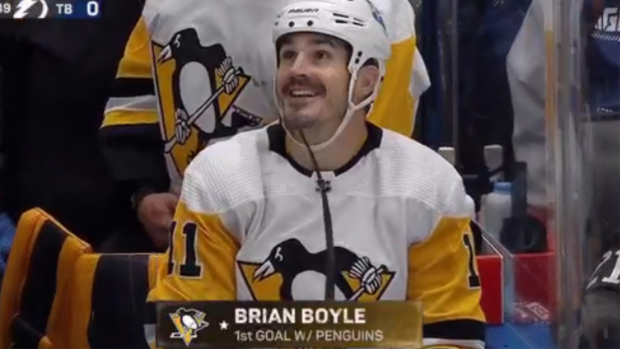 Brian Boyle after scoring his 1st goal as a Penguin

What a story. NHL journeyman, Brian Boyle scored tonight in the NHL’s Opening Night of the 2021-22 season as a newly signed member of the Pittsburgh Penguins.

Boyle recently signed a PTO with the Penguins after not playing the entire 2020-21 season. At 36 years of age, it appeared as though his days of playing in the NHL were over. With the Penguins missing their two superstar centres, Sidney Crosby and Evgeni Malkin to start the year, it presented the opportunity to give the Hingham, Massachusetts native a shot. Boyle is a fan favourite amongst many hockey fans and seeing him breakthrough tonight and get on the score sheet was something special to watch.

It’s been no easy road for Boyle, especially over the last couple of years following his cancer diagnosis in 2017. As someone who has a plethora of life experience, both on and off the ice, Boyle will continue to be a welcome addition to the Penguins locker room and if he buries a couple of pucks that won’t hurt either.

Fans were obviously ecstatic after Boyle’s goal to give the Penguins a 2-0 lead over the defending Stanley Cup champions.

Brian Boyle is tied for the league lead in scoring.

Brian Boyle signed with the @penguins this morning after remaining unsigned through the entirety of the 2020-21 season and last skating in an NHL game during Game 4 of the 2020 #StanleyCup Qualifiers (w/ FLA). #NHLFaceOff#NHLStats: https://t.co/8teUEUOazw pic.twitter.com/GUsEgBHwpM

Brian Boyle makes it 2-0 for the Penguins! pic.twitter.com/8726yz5yOD

GOAL! BRIAN BOYLE! WHAT A STORY!!!

After attending training camp on a PTO and signing a contract this morning, he gives the Penguins a 2-0 lead!

We absolutely LOVE to see it.

Out of the league for an entire year.
Doesnt give up.

Couldn’t be happier for Brian Boyle. Great to see him getting another opportunity!! 👏🏼

But, in all honesty, who had Brian Boyle and Danton Heinen as the first two goal scorers of the new season on their bingo card?

Either way, it’s only the first night of the new campaign and we may have a frontrunner for a feel good story of the year.