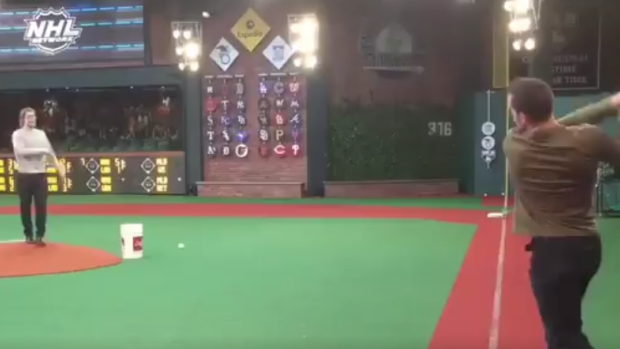 NHL players are obviously incredible at their sport, but we imagine many of them (like most professional athletes) were good at multiple sports growing up before deciding to pursue hockey.

Auston Matthews, for example, played baseball until he was 13 (and his dad played baseball for Loyola Marymount University) before pursuing hockey, but he still has some skill with a bat in his hands.

The Buds may play hockey, but they still hit 💣 at Rogers Centre today. Thanks for stopping by, @MapleLeafs! #LetsRise pic.twitter.com/fvtDtg2lpR

From what we've been able to find on the internet, we're not sure if Bo Horvat or Brock Boeser ever pursued baseball growing up before channeling all of their energy on hockey, but we do know both pack some power.

Monday, the two Canucks took some hacks while at the MLB Network Studios.

Both players are pretty good with a bat in their hands, but they weren't as good on the mound.

If the Canucks ever decided to play a friendly game of baseball, we imagine these two would probably be picked pretty high based on what we saw from these videos.

We imagine the team's fans would rather watch the two continue to light it up on the ice, though, as they've combined for 39 points this season.