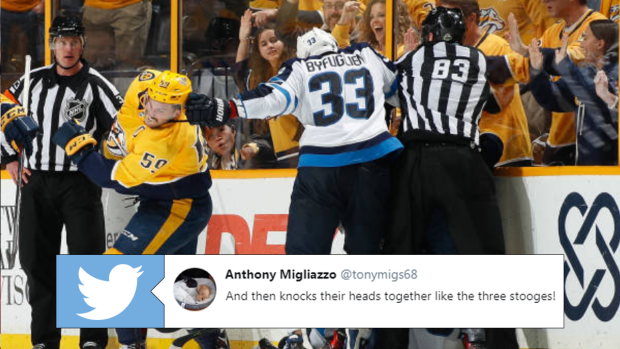 When it comes to the strongest players in the league, the discussion can’t be had without at least mentioning Dustin Byfuglien. The hulking 6’4, 265lbs blueliner is a massive presence on the ice, and if you leave your head down for just a second you could end up paying a huge price.

In fact, even if your head is up you may end up paying a huge price. He’s been known to throw huge body checks that literally take out 2-4 players at a time. On Sunday, he made sure that everyone knew it wasn’t just a proper use of momentum when he displayed his raw strength while rag dolling two Nashville Predators at once.

Dustin Byfuglien pulls 2 players and a linesman out of the scrum by himelf pic.twitter.com/bAzAAOHg5g

He wasn’t dealing with a couple Johnny Gaudreaus either. He had Roman Josi (6’2) and Austin Watson (6’3) basically under his complete control. In the end he appears to almost smack the two Predator’s heads together, giving the feeling of a big brother picking on his two younger brothers.

And then knocks their heads together like the three stooges! Lol

Byfuglien is the baddest dude in Hockey. What a game!