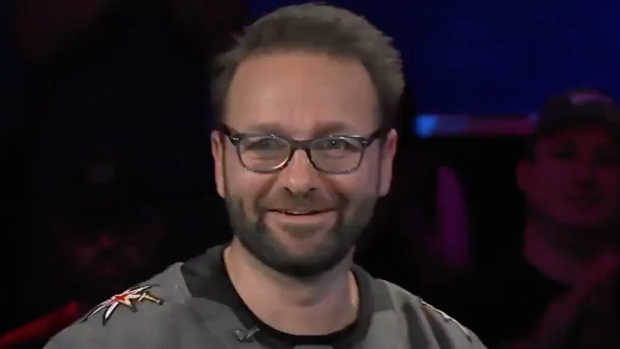 Canadian Daniel Negreanu is a poker legend, but his run for a World Series of Poker Main Event Bracelet has come to an end.

On Day 1C, Negreanu was eliminated on a hand that most would feel good about, pocket Jacks.  He was going up against a pair of 10s and unfortunately for Daniel, another 10 showed up on the flop.

Although Negreanu was bounced, he had all the jokes before and after being eliminated which made it that much more enjoyable.

Down goes Daniel Negreanu! @RealKidPoker's jacks are sent to the rail and his 2018 Main Event run is cut short on Day 1C.
Watch more @WSOP only on PokerGO!
▶️ https://t.co/wtwTU6NmGw pic.twitter.com/vzBYsK7WS9

My main event in a nutshell! https://t.co/fyPXQCnX7X

You wouldn't be able to tell Daniel was pissed off after losing the hand based on his reaction.  He loves to talk at the table and whether he wins or loses, it always seems like he's in a good mood.

Despite being bounced, Negreanu still managed to provide us with some memorable moments which we'll be able to enjoy until the next time he's at a table chatting it up.

Canadian poker star Daniel Negreanu (@RealKidPoker) gave his thoughts on the Leafs signing John Tavares at the table during the World Series of Poker 😂😂 pic.twitter.com/8w8OL03COr