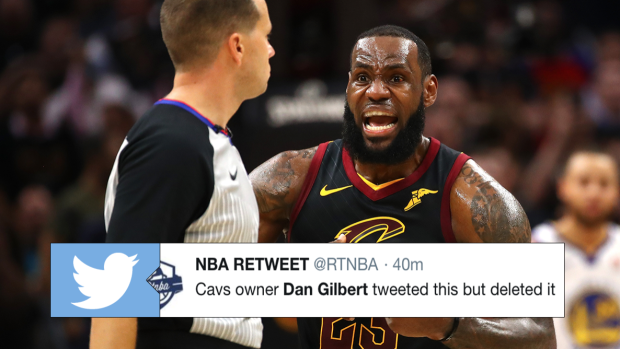 Officiating has been a big talking point thus far in the NBA Finals and it continued in Game 3 Thursday night.

After the first half, Cavs owner Dan Gilbert decided to tweet a picture (which then deleted) of the stats at half and the only thing he circled on the sheet were the number of free throws each team got in the half.

Cavs attempted their first foul shot 22 seconds into the second half after zero first-half attempts.

It's clear Gilbert wasn't happy with the officiating, but once a tweet is out there, someone is going to take a screenshot of it.  Plus, free throws aren't always the best indicator of how a game has been officiated, but at this point the Cavs don't want to hear any of that noise.

Also, in case you were wondering if Gilbert is still tweeting, he is, but it's not about the officiating.

Kareem looks great. What an honor to host this outstanding human being at The Q. It’s almost surreal. pic.twitter.com/8aWv36dHyZ