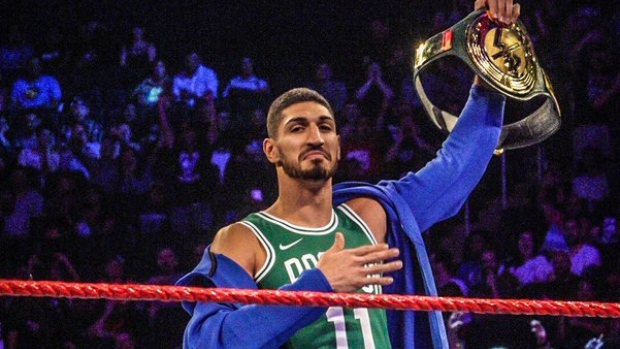 Well, this would probably go down as one of the shortest WWE title reigns in history.

Introducing Enes Kanter to the ring at Madison Square Garden before Monday Night RAW, WWE 24/7 champion R-Truth became the surprise victim of a pinfall from the NBA big man.

Kanter turned heel quick, revealing a Celtics jersey to the crowd in New York — he started last season with the Knicks, but was bought out during their youth movement and joined the Blazers for the playoffs before signing with Boston this offseason. He only held on to the title for about 30 seconds, before R-Truth rolled him up from behind and took the championship right back.

In reality, the shortest title reign belongs to Andre the Giant, who held the WWE Championship for all of a minute and 48 seconds in 1988.

Kanter wasn’t even able to hold his title for half as long, although to be fair, he isn’t a professional wrestler — even though back in his college days with Kentucky, he fashioned himself after the Undertaker from time to time.

Enes Kanter ( @Enes_Kanter ) comes out as The Undertaker at Big Blue Madness (2010) pic.twitter.com/sXYh74kxup