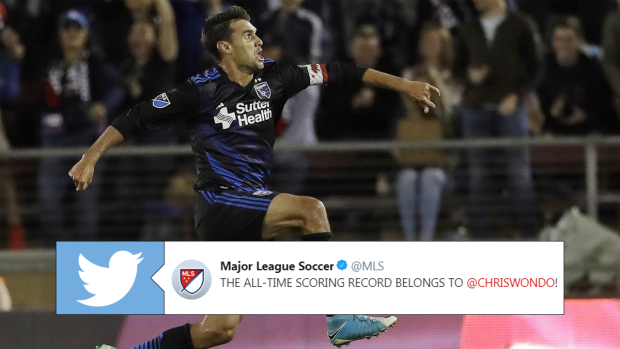 When you hear the name Landon Donovan, a lot of bells start to ring. You remember his legendary career in Los Angeles, or his international heroics with the U.S. Men’s National team. He is one of those names that will always be associated with production on the field, and it’s led to numerous records.

One of those records fell on Saturday. A big one too.

Chris Wondolowki of the San Jose Earthquakes has been creeping up on Donovan’s all-time MLS goal scoring for some times now. On Saturday, “Wondo” finally made history. He couldn’t have done so in more spectacular fashion.

After scoring the record-tying goal (145) in the 21st minutes, Wondo went on to break the record just after halftime. What was already an iconic day in the MLS became even more so when the new record holder widened the margin even further, scoring his third and fourth goals within the span of three minutes gametime.

Here’s a look at all four of his goals:

WONDO HAT TRICK ARE YOU SERIOUS

Way to make a moment a masterpiece. As you may expect, Wondo received props from the soccer world on his incredible accomplishment. That included this special message from Landon Donovan himself.

It was an honor to play with and against you @ChrisWondo Congrats on an incredibly well deserved achievement ⚽️👑⚽️👑⚽️👑 https://t.co/8MaaiCoWZx

in the most Wondo of ways, @chriswondo smashes through the all time @MLS goal scoring record with 4 goals on the day. hats off to the 👑 - congrats to the best finisher in MLS history and an all around great guy pic.twitter.com/qIlb57Ffwq

Congrats @ChrisWondo!!! The new All-Time @MLS Regular Season Goal Leader! Your consistency to find the back of the net is second to none and it couldn’t happen to a better guy. Keep it going! 💯 #MLS #GoldenBoot #Quakes74

Huge congrats to @ChrisWondo! Couldn’t think of a better guy to break the record! Much deserved and super happy for you bud! Enjoy it! 😊 🙏🏻

Congrats @ChrisWondo. That’s some way to break the record! #GoalKing

Keep proving the haters wrong Wondo! Some of these kids don't know off the ball movement and positioning is a more important skill than scoring goals outside the box!