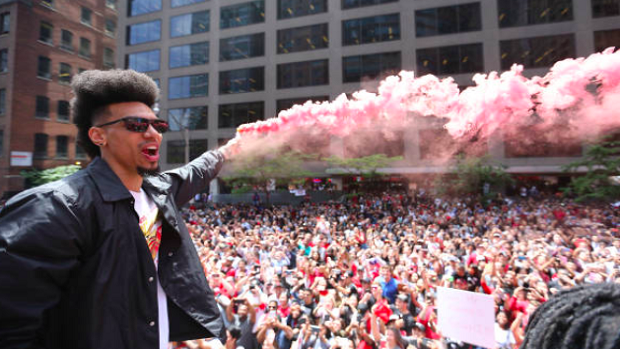 Danny Green was supposed to get his NBA championship ring when the Los Angeles Lakers made their lone trip to Toronto, but due to the coronavirus pandemic that trip isn’t happening this year.

With the two teams set to meet on Saturday night, Green was asked about having a mini ring ceremony inside the NBA bubble and said that he’d rather wait and have it in front of the fans in the city of Toronto.

Danny Green & @94feetofgame had an opportunity to get their championship rings tonight in the bubble, they passed. Here’s why: ⁣⁣
⁣⁣
Subscribe for @JaValeMcGee episode notification.

Green said that he spoke to the Raptors’ front office staff and they suggested having a mini one in the bubble and then another one when they’re able to return to Toronto. However, Green told them to hold on to it and wait until they’re able to play in front of fans again.

Danny Green on his ring: i'd rather do it in front of the fans in the city where i played and soent a great year... You can hold onto it, i'm in no rush."

This man's getting a big old standing O next time he's in Toronto https://t.co/3PnUjeT64d

Danny Green only played one year in Toronto, but he’s someone that Raptors fans will always show love to whenever he’s in town, no matter what jersey he’s rocking.