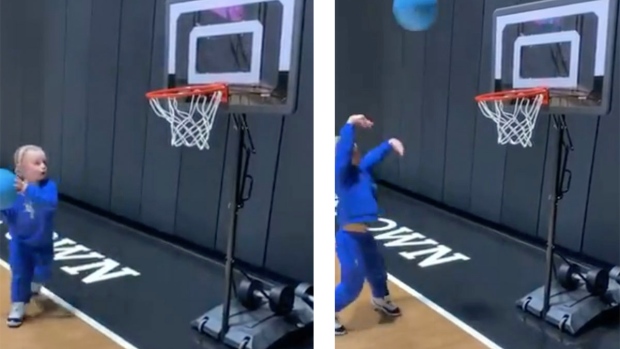 Is there any relationship between a professional sports team and a celebrity that’s as iconic as Drake’s bond with the Toronto Raptors?

If there is, we can’t think of one.

Drake takes being a fan of his hometown NBA team to an unprecedented level; he’s their official global ambassador, his OVO brand is deeply intertwined with the Raps, and his presence courtside is a vital part of the Toronto basketball experience. In fact, if you think back to the Raptors 2019 Final series against the Warriors, he was just as involved with the drama as any player on either team.

It’s safe to say Drake is an honourary Raptor, and it looks like he’s raising his son to be one too! Drake shared this video of his 3-year-old son, Adonis, absolutely hoopin’ at his private basketball court. Not only that, but it looks like he’s gunna be a big ‘Bron fan!

Drake is raising Adonis to be a LeBron fan already 😂

It looks like Adonias is going to grow up loving basketball as much as his dad, and we’ll be looking out for him in the 2025 draft!