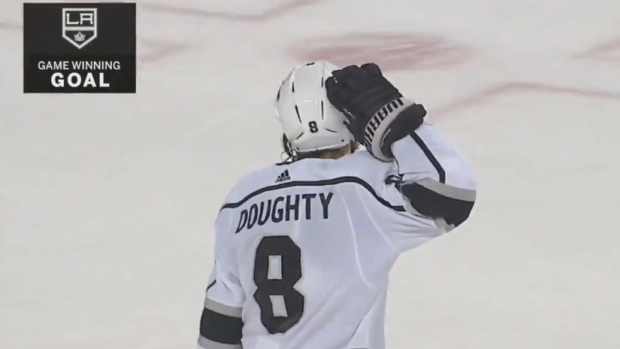 In the latest battle of Matthew Tkachuk vs. Drew Doughty, it was the veteran defenceman who got the last laugh.

Doughty capped off the latest chapter in arguably the best NHL player feud by scoring the overtime winner, as the Kings sunk the Flames 4-3 in overtime on Tuesday night.

The game was packed with drama, as Tkachuk got the Flames on the board in the second period after the Kings jumped out to a 3-0 lead.

Fast forward to the 3rd with the Flames trailing by a goal, Calgary pulled the goalie and it was Tkachuk who scored a ridiculous, game-tying goal at the side of the net showing off some superb hand-eye coordination, all off a Doughty giveaway.

With the Kings on the man advantage in overtime, Doughty blasted home the winner after it redirected off a Flames stick.

After he celebrated with his teammates, the two-time Stanley Cup winner and Olympic gold-medalist taunted the crowd with a page out of Hulk Hogan's playbook.

Doughty finished with 3 points (one goal, two assists), while his foe Tkachuk matched the points output with two goals and one assist.

Since Tkachuk's rookie season, the feud between the two stars as grown in almost every game they've played. In March of 2017, Doughty called Tkachuk a "pretty dirty player" after receiving an elbow in the face courtesy of the Flame.

Before this game, Doughty reignited the beef by reminding everyone who's the better player between the two.

Then, was asked about why the rivalry hasn't been squashed and could have been solved with a compliment: "I think we both know who the better player is, so if he wants to compliment me first, I'll give him one back."

Post-game, Doughty was all smiles.

Drew Doughty got the last laugh in the latest chapter of the Doughty vs. Tkachuk feud. 🤫 pic.twitter.com/EmJj4TAqrq

The two clubs will renew hostilities on Saturday, October 19, when the Flames visit Southern California.