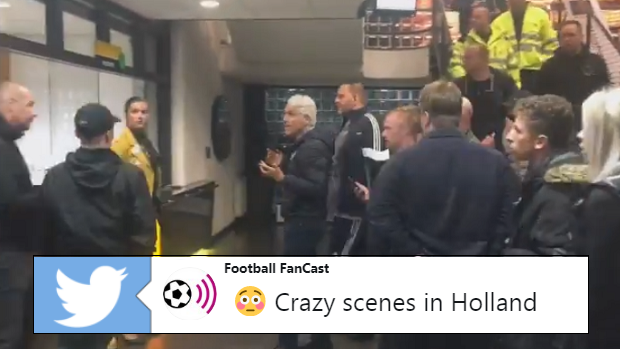 Mauricio La Vega is actually escorted out of a stadium by his team's fans. , Football Fancast/Twitter

An owner of a soccer team shouldn’t have anything to worry about at a game, right? They probably have the best seat in the house and should have the best security around them. What could possibly go wrong?

Dutch club Roda JC Kerkrade’s fans stormed into the directors box and kicked owner Mauricio La Vega out of the stadium. The team has won just one of their opening eight matches in the Dutch second tier. According to dailymail.co.uk, La Vega was warned by police and the local mayor to not attend last Friday’s league fixture due to fear over his safety.

But he didn’t listen… this is just wild.

A group of supporters confronted the owner in his box and literally manhandled him out of the stadium. Did you notice that there wasn’t a single security guard who stood up for him?

Staff salaries are in jeopardy of not being paid next month and on Monday, the club’s entire crew called in sick to protest the situation. This is getting pretty out of control!

DOESN'T ADD UP Chelsea’s loanee Ike Ugbo, 21, has not been paid this month as Dutch club use his £38k wages to pay his team-mates. Mauricio de la Vega is horrendously unpopular at Roda and the club want the Mexican investor kicked out after he attempted to take over last summer pic.twitter.com/DYBf33fbls

We’ve seen a lot of weird things in sports but this… this is definitely up there with the weirdest.