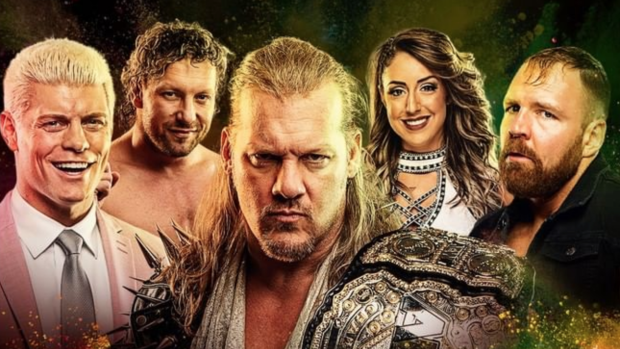 I'm a MASSIVE wrestling fan, but most of you who know me already know that.  I can hear the "wrestling is fake" commentary in the background, it's fine I totally get it and accept the fact that not everyone enjoys it just like every single thing in life.

That said, there's no better time to be a wrestling fan than right now and on Wednesday night, an exciting new chapter officially begins when AEW Dynamite debuts at 8pm ET on TSN2 in Canada.

If you're not a wrestling fan, you've likely never heard of AEW and even if you are a wrestling fan, there's a chance you're unfamiliar with the newest promotion in the industry.
Whatever the case may be, you're about to get an education in everything All Elite Wrestling ahead of the debut Wednesday night.

The answer to that question is quite simple, actually.  AEW is a new wrestling promotion founded by Tony Khan, son of Jaguars owner Shahid Khan, Cody Rhodes, Matt and Nick Jackson (The Young Bucks), and Kenny Omega.

Cody, Matt, Nick, and Kenny serve as executive VPs, but first and foremost, they're four of the biggest stars in the company.  Tony, on the other hand, is the President and CEO of AEW.

AEW Star @KennyOmegamanX Explains Why They Have the Best Wrestling in the World | TV Guide https://t.co/fXODKwpCnu via @TVGuide pic.twitter.com/CTjeqRlyjH

AEW is so much more than just another wrestling promotion, though, because for the first time in a long time, WWE finally has what feels like a legitimate competitor in North America that features some of the best wrestlers in the world.

It also offers up a different, but incredible and entertaining style of wrestling than you're probably used to seeing.  Make no mistake about it, AEW has already changed the landscape of the wrestling world forever and will continue to change it for the better in the future

Who are the Stars I should know about?

From top to bottom, the AEW roster is LOADED with the best independent wrestlers on the planet.  Some happen to be former WWE superstars, while others have never wrestled for that company before.

Let's start with the Canadians.  Chris Jericho, one of the greatest wrestlers of all-time (and current AEW World Champion) and Kenny Omega, viewed by many as one of the best wrestlers on the planet, are both from North of the border.

Cody Rhodes (son of the late, great Dusty Rhodes) and Jon Moxley (formerly known as Dean Ambrose) are two former WWE wrestlers that have taken their stardom to new heights since going their own way.

AEW's Women's Division is start studded with Awesome Kong, Britt Baker, Allie (who is also Canadian) Riho, Nyla Rose, Penelope Ford, and SO many more of the world's best wrestlers.

The tag team division is also stacked with The Young Bucks leading a pack that features SCU, Private Party, Best Friends, The Dark Order, Lucha Brothers, and LAX, among others.

I can rave about the roster all day (Jungle Boy (Luke Perry's son), Shawn Spears (Canadian), PAC, Dustin Rhodes, Adam Page, Darby Allin) because it's that deep and that talented.  Simply put, there's someone for EVERYONE and discovering a new favourite wrestler is part of what makes this experience so great for fans unfamiliar with some of these names.

What can fans expect from the first episode of AEW Dynamite?

The card for AEW's debut episode of Dynamite next Wednesday! #AEWDC #AEWDynamite pic.twitter.com/TWG6lGDVZu

A ton of fantastic wrestling for starters, highlighted by AEW's first ever Women's Champion being crowned when Riho battles Nyla Rose.

AEW Champion Chris Jericho will also be in action when he teams up with two mystery partners to take on Kenny Omega and The Young Bucks.  If you can't tell, I'm as excited as ever for the debut of AEW Dynamite and I hope non-wrestling fans will tune in because you'll be watching history in the making.