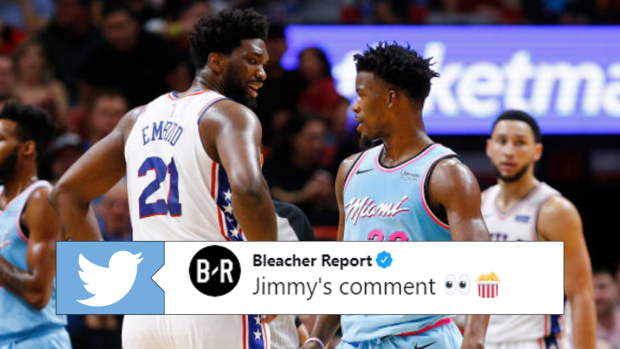 Jimmy Butler seems to have finally found a place where he’s happy. After sifting through Chicago, Minnesota, and Philadelphia – all of which he had problems with – Butler has finally found a home in Miami. Now he just wants some help to come with him for the ride, it seems.

Jimmy Buckets slid into the comment section on a post from former teammate Joel Embiid. With an image of “The Process” shushing the crowd, Embiid captioned the post “You either die a hero or live long enough to see yourself become the villain.”

The caption itself doesn’t seem like much to read into, but Butler quickly commented on the post explaining that he “knows a place where villains are welcome.”

However that may be interpreted, it seems like Embiid is on board…

This is likely too ambiguous to ever be considered evidence of tampering, but fans certainly seem to think they know what Butler’s between-the-lines message was.

Bam seeing this knowing he'd be included in any trade for Embiid pic.twitter.com/expVEbgNP4

Embiid and Jimmy on the heat🔥