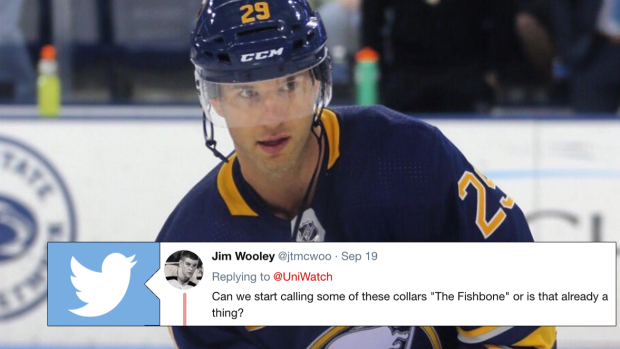 For fans that didn't fall in love with their team's new sweater at first sight, seeing players playing in them could change their minds, or it could further confirm their disdain for the jerseys (or certain details of the jerseys).

There's one detail in particular about some of the jerseys that fans have tweeted about over the course of the preseason and it had to do with collars.

Some of these new NHL jersey collars are reminding me of something.... (h/t @jtmcwoo) pic.twitter.com/IPw10SiLrp

The collar looks a little odd to say the least, but some fans really don't like the look.

Agreed to this back in a June tweet. pic.twitter.com/IYKnDLkUqo

The Sabres' collar isn't the only one that's creating conversation on Twitter.

Whoa, the collar on the new Red Wings jersey is really thick. pic.twitter.com/YxolF9j9N7

The neck collar on the Sens jersey is RIDICULOUS pic.twitter.com/Sy7F4cEjYV

Those collars are real thick, but for all those fans that don't like them, give them a chance, it's still early.