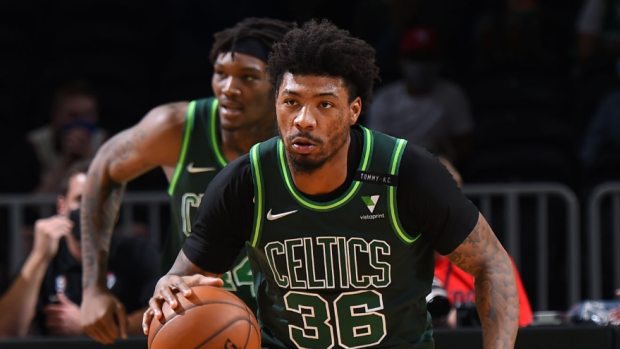 Basketball is a difficult sport to officiate. The action is so bang-bang that it can sometimes be difficult to tell whether or not there was an infraction while watching live, particularly if the refs don’t have a good angle on the play.

That’s what made video replay so revolutionary. While some complain that it slows the game down, it definitely does result in more plays being called correctly after the officials have a chance to re-watch, slow down, and pick apart plays.

Saying that, there are still times when the basketball world simply can’t agree on a call, no matter how many ways it’s shown.

This was the case towards the end of an exciting Boston Celtics vs. Portland Trail Blazers game when Marcus Smart found himself on the wrong end of a video review. What was originally called an illegal screen on Jusuf Nurkic turned into an offensive foul on Nurkic, a technical for Smart, and an ejection for Smart as well.

Marcus Smart got ejected late after this play on Nurkic 👀 pic.twitter.com/bSWpbwu0Db

Immediately, armchair refs took to Twitter to voice their opinions on the call. Many thought it was incidental, while others thought it was a clear and obvious ejection. To make the situation even murkier, Smart had received a brutal elbow to the head after Norman Powell came in aggressively for a rebound.

Powell was issued a common foul on the play.

This doesn’t warrant an ejection. The decision was made solely off Marcus Smart’s reputation. Paused the game for 10 minutes just to settle on an atrocious call. Plus how does someone get tossed with only one technical? #RefShow #PORvsBOS

The call was a technical foul, so all the more confusing that Marcus Smart got ejected.

On top of this ejection, there was another confusing ejection in the Dallas Mavericks game. Luke Doncic received a 2nd technical, resulting in an automatic ejection, but nobody is quite sure why.

Luka just got a technical for breathing.. pic.twitter.com/dXLA7tSolw