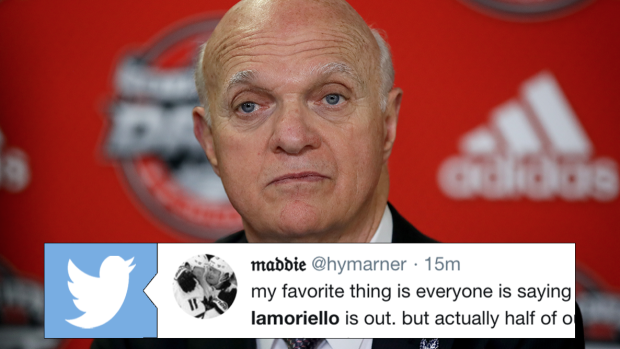 The Toronto Maple Leafs made a major announcement on Monday morning involving Lou Lamoriello's role with the team going forward.

Brendan Shanahan announced that Lamoriello won't be back as the Leafs' GM next season.  Instead, he'll remain with the team as a senior advisor.

BREAKING NEWS: #LouLamoriello won’t return as the #Leafs’ GM next season. Lamoriello will remain with the team as a Senior Advisor.


In a press release, Shanahan explained that the plan was always to have Lou transition into a Senior Advisor's role after three years as the general manager of the team.

Once the news broke, the reactions poured in and there was a common theme we saw from the hockey world now in regards to the reaction to the news:

Shanahan says the original agreement three years ago was for Lamoriello to be GM three years and then transition for senior advisor for four years... The Leafs president stuck to that agreement.

Lou was just there to show the young administration the ropes. He did a good job, but it's not a surprise.

Farewell Lou and welcome back facial hair and flow

Does this mean Marner can finally take the whole regular season to work on his playoff beard?

What’s that sound.... it’s sound like... OMG ITS KYLE DUBAS FROM THE TOP ROPES

Off to Robidas Island? pic.twitter.com/1mCjK4sl9O

Beards gonna be back in play

Will Nylander swtich back to 62 now?

I'll always remember Lou Lamoriello as the GM who somehow got the Leafs out of the Phaneuf contract with no long-term cap implications.

How long until #Isles announce Lou Lamoriello as their new GM?

Lou Lamoriello to not return as Leafs GM so now all we need to find out is if the players are gonna start growing their beards now or wait till October.