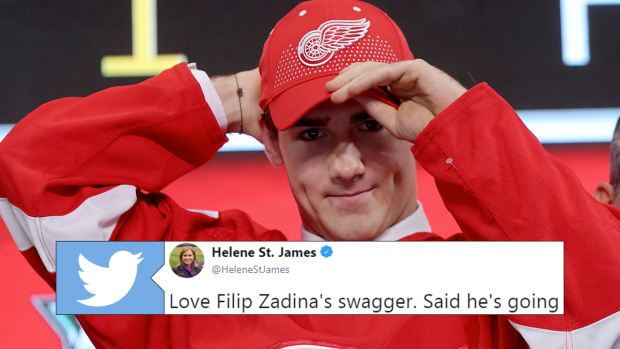 All year, it seemed as if Filip Zadina was in a tier above the rest of the draft with Rasmus Dahlin and Andrei Svechnikov, but he ended up well below it.

By the end of the season, Zadina was ranked third overall by most scouts and analysts, but when he finally got drafted, it wasn’t until the 6th overall pick. Apparently that is just going to fuel him even more. He is more motivated than ever and had a very confident statement for the Habs and Sens after passing on them.

Love Filip Zadina's swagger. Said he's going to make Montreal & Ottawa pay for passing on him.
“I was telling my agent, if they will pass on me, I’m going to fill their nets with pucks. I want to prove to Detroit that they make a pretty good decision.”

Zadina had no problem filling the net in the QMJHL this season, so it wouldn’t be a surprise if he kept that up into the NHL.

He scored 44 goals with the Halifax Mooseheads and had 82 points in 57 games. On top of that, he was able to score seven goals in seven games at the World Junior Championships in January. It wasn’t a bunch of grimey goals either. He showed some elite skill against the eventual gold-medal Canadian team.