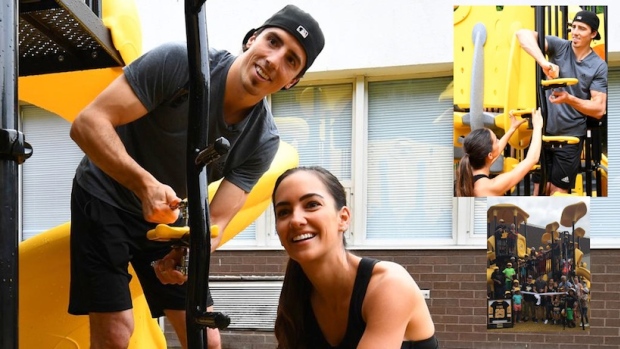 At this point in the Vegas Golden Knights’ team building discussion, the most consistent name on everyone’s ‘Build Your Own Golden Knights’ list is Marc-Andre Fleury. The goaltender has a very real chance of being selected by the Golden Knights, which means his time in Pittsburgh is winding down.

Fleury will be remembered fondly in Pittsburgh after contributing as a member of three Stanley Cup championship Penguins teams, but the goalie wants to be remembered for being a community man in the city as well.

While he very well knows these are most likely his final days in Pittsburgh, Fleury was out spending one of those days helping build a wonderful playground for youth in the city.

Marc-Andre Fleury is an incredible human being. Enough said.

The playground is open! Thank you Fleury for this wonderful playground #Project29 @BGCMA_Clubs pic.twitter.com/tu4Lk5C3SA

Project 29 is underway at The Boys and Girls Club! 💛🐧 pic.twitter.com/zkhZ9i5h1I

Look at this guy! Out in the Pittsburgh community working with @pensfoundation till his final day! Awesome! #LetsGoPens #FlowerPower pic.twitter.com/dj1DJbqdLg

Bringing smiles & so much more to kids in our community... Learn more about Fleury's #Project29: https://t.co/wbzrXNUiKN pic.twitter.com/eXWStD8JYw

The city of Pittsburgh will miss Fleury on the ice, but they might miss his generosity and contribution to the community even more. It’s not every day an athlete is drafted into a community who spends countless hours giving back the way Fleury did in Pittsburgh.

It’s the end of an era for the goaltender, but we’re sure he will never forget the great memories he shared with his family in the city, and with the people of Pittsburgh.