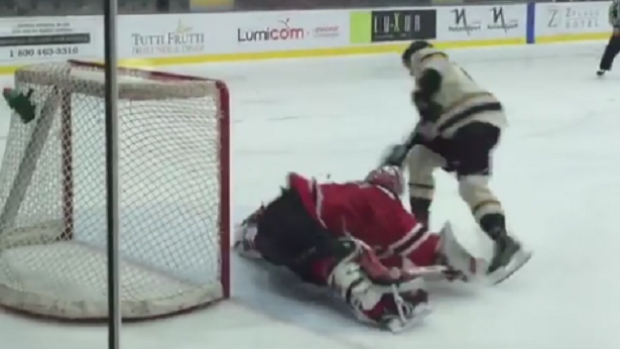 There are some odd rules about the shootout, such as the puck having to move forward at all times.

Without seeing the rule called into action, it’s hard to understand why that might matter, but it’s easy to see in this move. On Saturday night, Pascal Laberge, a Philadelphia Flyers 2nd round pick from last year, came down on Quebec Ramparts goalie, Evgeny Kiselev, and pulled off a move that was just unfair – literally.

He succeeded in undressing Kiselev, but the goal didn’t count because the puck moves backward at one point.

cash me outside how bout dat 🤓

This is one of the goals that you just tip your hat to the shooter, because there’s not much else you can do. Luckily for Kiselev, the rules were on his side. A goalie that plays in Canada’s U Sports university hockey wasn’t so lucky over the weekend, when Grant Valiquette pulled off this ridiculous shootout winner.

Overall, not that lucky, though. The Ramparts still ended up losing to Laberge’s Tigres on their very next opportunity.