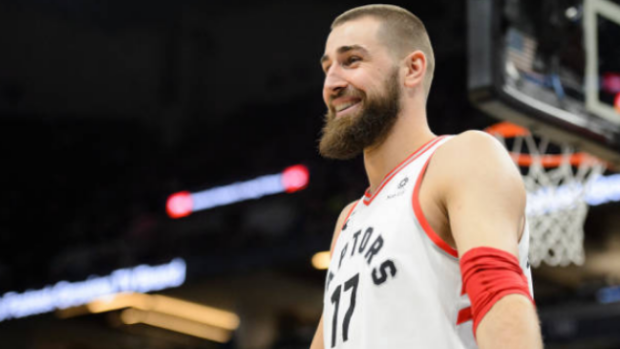 Do you think Jonas Valanciunas deserves an NBA Championship ring even though he was traded off the Toronto Raptors' roster before they won the Larry O'Brien Trophy?

The former Raptors big was asked about whether he's heard from the Raps at all regarding the topic, and although the team hasn't said anything official, his former teammate Kyle Lowry has his back.

Does JV deserve a ring? 🤔

Valanciunas is the starting centre for the Lithuanian national team, who are ranked sixth in the world and will be taking on No. 23 Canada on Tuesday in the first round of the FIBA World Cup.

The 27-year-old was in attendance for the Raps' first-round series against the Orlando Magic and received a standing ovation when he showed on the jumbotron at Scotiabank Arena.

JV admitted he took a keen interest in the playoff run in cheering on the team who traded him away to Memphis, but it wasn't without some emotions.

"It was kind of hard because I wanted to be there. But it was fun to watch because my guys were doing good," he said.

The 5th overall pick in the 2011 NBA Draft was the primary piece packaged to Memphis along with Delon Wright and C.J. Miles that yielded Marc Gasol at the trade deadline.

Valanciunas will make his official on-court return to Toronto on March 30th, which could be the date he gets the ring if the Raps chose to grant him one. The current Raps will receive their rings at the home opener against the New Orleans Pelicans on October 22nd.

Valanciunas is one of two NBA players on the Lithuanian team along with Indiana Pacers forward Domantis Sabonis.