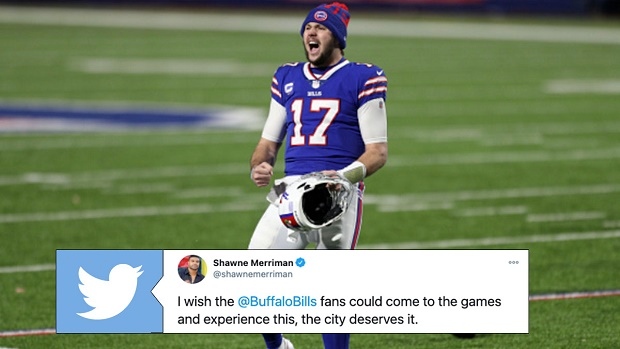 The Buffalo Bills are headed to the AFC Championship for the first time since the 1993 season!

After a quiet opening half where the two teams combined for just six points, the Bills came out flying in the second half and put up 14 points in the third quarter to seal the deal.

THE BILLS ARE BRINGING THE TABLES TO THE AFC TITLE GAME 💪 pic.twitter.com/ClObYB025c

The last time the @BuffaloBills were in the AFC Championship game the World Series Champs were the @BlueJays ... who played last season in Buffalo. 🤯 pic.twitter.com/ctbyv1PoZL

With the Bills experiencing their most successful season in more than 20 years and the team taking a trip to the AFC Championship Game for the first time in 28 years, you can bet the celebration has started.

For the first time since 1994... the @BuffaloBills are back in the AFC Championship! #BillsMafia #NFLPlayoffs pic.twitter.com/ANvjGj0G2f

Is this real life?! https://t.co/QLyJsluLnx

The Bills are off to the AFC championship! #BillsMafia pic.twitter.com/LN3ELFQBje

All folding tables in Buffalo: pic.twitter.com/mkqGz1yhS2

We’re not sure if there are even any folding tables left in Buffalo for Bills fans to jump through next week, but we’re sure they’ll find some somehow and someway.

Congratulations to the Buffalo Bills!