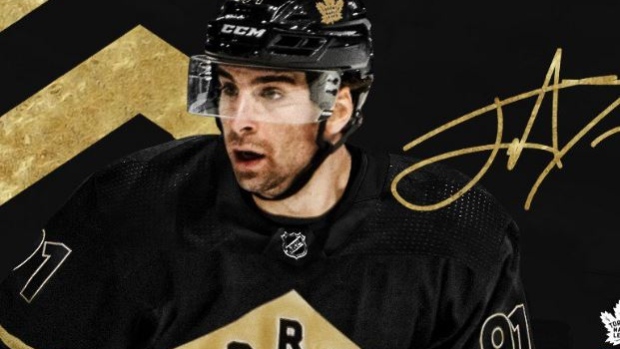 Just like the other five original six teams, the Toronto Maple Leafs take pride in their iconic logo and colours. With the exception of a few variations, such as the Toronto St. Pats and the Toronto Arenas, the team’s identity has been just about the same for the past century.

That doesn’t mean there’s not a little room for fun, though!

A graphic designer created a concept jersey that Toronto sports fans are sure to love. Based after the “City Edition” jersey that the Raptors donned last season, the graphic shows Toronto’s new superstar John Tavares wearing OVO black and gold with the iconic “North” mark scrawled across his chest.

This was fun.
Leafs alternate jersey based on the Raptors' "City Edition" jersey. pic.twitter.com/OzU1GmTKJW

While traditionalists may see this as blasphemy, the league seems to be promoting more and more in the way of fun looks. This jersey will likely never happen, although a little sports crossover is always a fun thing to dream of. Just take a look at some of these other cross-sport concepts.

The #AFCChampionship reimagined as the Eastern Conference Final. What do you think? 🤔#ConceptJersey . (Design via @bonezgt )

The #NFCChampionship reimagined as the Western Conference Finals. What do you think? 🤔#ConceptJersey . (Design via @bonezgt )