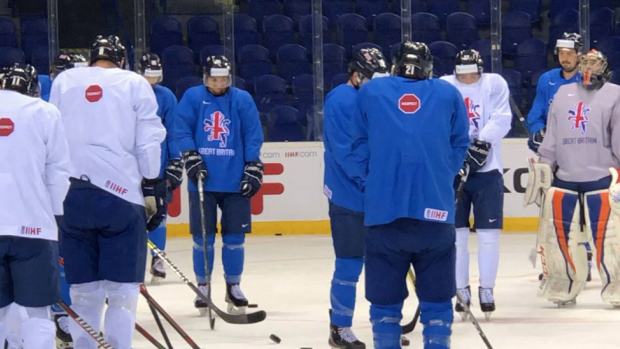 For the first time since 1994, Great Britain is participating in the IIHF World Hockey Championship and although they're heavy underdogs in the tournament, they're enjoying every single game and opportunity to play against the best players in the world.

Great Britain also has the most talked about pre-game ritual called 'Bombs Away' that is both unique and potentially painful depending on if a player decides to look up during the ritual.

There's a reason why you shouldn't look up during this pre-game ritual, so you don't get hit right in the face with a puck.  We told you the ritual was unique.  We've never seen anything like it, but it seems like it would be fun to try.

The goalies obviously have the advantage in this ritual as they have to stop pucks with their bodies for a living and Wednesday, goaltender Ben Bowns had the game of his life in a 6-3 loss to the United States.

Ben Bowns absolutely ROBS Jack Hughes of his first goal of the World Hockey Championship. What a save! pic.twitter.com/PwiK27ZFif

USA beats Great Britain 6-3. Americans put 65 shots on goal. Ben Bowns made 59 saves. Unreal performance from him. Almost as good as the British supporters group who were the real MVPs.