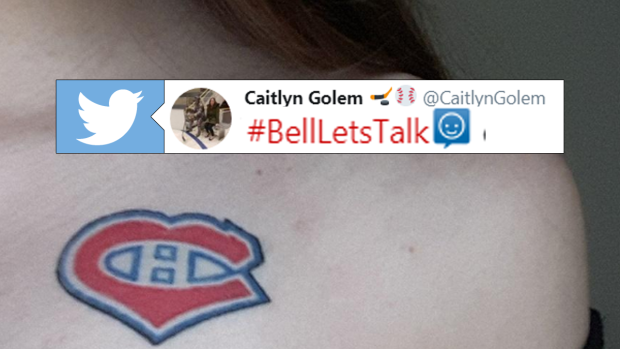 Few things are more important in defining Canadians than their choice of hockey team. Rarely will you find someone in the Great White North that doesn’t have some kind of passionate allegiance to a certain team. Once you have a team, you’re automatically part of the bitter rivalries.

Few rivalries are more historic on the ice than the one between the Toronto Maple Leafs and the Montreal Canadiens. The Buds and Habs, both members of the Original 6, have been through countless battles in the regular season, the playoffs, and the Stanley Cup Final. While team positioning in the standings may send the rivalry through ebbs and flows, it will always have a little extra importance when the two particular squads face off.

One fan is willing to put that all on this line in the name of mental health awareness.

Giving you guys another chance this year
If this tweet reaches 200,000 retweets by the end of #BellLetsTalk day, I, an absolute diehard #Habs fan, will get a @MapleLeafs tattoo!

(Keep in mind the picture shows how big of a Habs fan I am) pic.twitter.com/YlsMtBVjr8

Caitlyn Golem, a self-proclaimed diehard Habs fan, is willing to get a Leafs tattoo permanently etched on her if her tweet – featuring a tattoo of the Habs logo for proff of allegiance – reaches 200,000 retweets.

Whether you’re a Habs or a Leafs fan, or any other team in the league (or not a hockey fan at all!), you should give her a retweet.