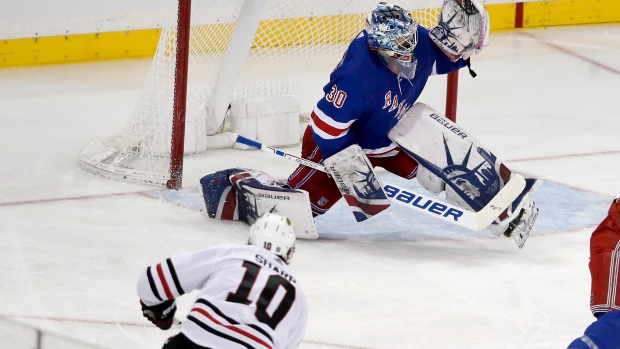 When looking at the New York Rangers roster for the upcoming season, it's pretty clear that one of the most consistent team in the NHL for the last decade isn't what they used to be after missing out on the post-season last season.

That is if Henrik Lundqvist doesn’t just in a time machine and regain the form that saw him start every single Rangers playoff game from April 2006 and onwards.

The 2011-12 Vezina Trophy was a guest on TSN 1050’s OverDrive on Wednesday with Scott MacArthur, Gord Miller and Dave Poulin, and was asked a number of questions ranging from playing with his twin brother Joel, competing internationally for Sweden, and of course, his future with the New York Rangers.

.@HLundqvist30 discusses his decision to stick with Rangers through transition, plus his new @Headshoulders campaig https://t.co/r7WnlAaVe4

Before the trade deadline last season, the Rangers management group threw the hockey world a curveball when they informed its season ticket holders that significant changes to the team were coming to the club in an honest, yet shrewd press release. Gone were Nick Holden, Michael Grabner, Rick Nash, J.T. Miller and Ryan McDonagh as well as head coach Alain Vigneault at the conclusion of the season. In were prospects and younger players who will be counted on to help carry out the rebuild for a team that missed the playoffs only once from 2006-2017. If you can't push for a playoff spot in today's cap world, then you might as well focus towards the future.

With speculation around the league that Lundqvist, who has three years left on his seven-year, $59,500,000 contract that’ll pay him $8,500,000 per season, could be next to leave New York, the man they call “The King” made it abundantly clear that his plans are to remain in the Big Apple, even if that means passing up a chance to seek out a Stanley Cup on a contending team.

“We had that discussion before the big announcement and everything. They kind of let me what was going on with the plan. To me, I made a big commitment to the organization and they made a commitment to me about four years ago.

“That was really the only time I was thinking about, 'okay, where I am I going to be in the next five, six, ten years, who knows?' For me, it was a simple answer: I told my agent back then I want to be in New York, I want to finish my career in New York -- that was my goal and that was my dream.”

“I know in the hockey world things change, things happen. The way they feel about me, or whatever is working might not work in the future, but there was no long or hard discussion for when that was brought to the table last year.”

“I want to stay here. I still believe we can turn this around pretty fast. My goal is to win in New York. That’s what pushes me the most and drives me the most right now. I want to believe it [winning a Stanley Cup] can happen before I retire.”

If you’re the Rangers organization, you can’t be upset at a guy that simply wants to honour his contract and win hockey’s ultimate prize with the only NHL team he’s ever known.

Even though the Rangers did approach Lundqvist about switching locations, the 36-year-old seems to be all in on riding out the rebuild for the rest of his deal.

The interesting storylines to follow will be how Lundqvist will handle the next crop of young goaltenders working their way up through the organzation by trying to take away his playing time. Will he be willing to share the crease with highly touted Russian goaltending prospects Alexandar Georgiev or Igor Shesterkin if they're ready to compete for the starter's job?.

He’s been a workhorse over his 13-year NHL career, and if things start to go south for the Rangers in the next few seasons, don’t be surprised if you start to hear whispers from the New York media that Lundqvist’s current stance on the team could very well change. It's worth noting that Lundqvist does have a no-movement clause, giving Lundqvist full control of any potential new destination.

If Lundqvist never gets his name on the Stanley Cup, it’ll be hard to not consider Hank one of the best goaltenders to ever play the game, as he holds the record for most wins by a Rangers goaltender, the team’s shutout record, and won an Olympic gold medal from the 2006 Winter Games in Turin, a 2017 World Championship gold medal with Team Sweden. He also is responsible for other records like becoming the only goaltender to win 30 games in his first seven seasons, as well as becoming the fastest goaltender to win 400 games just to name a few. No other European-born goaltender in the history of the game has more wins than Lundqvist’s 431 victories.

Excited to be back in NYC and get going at the Rangers practice facility. We r getting closer.. Time to get those feet moving!! #burninglegs pic.twitter.com/BooUSLJPTh