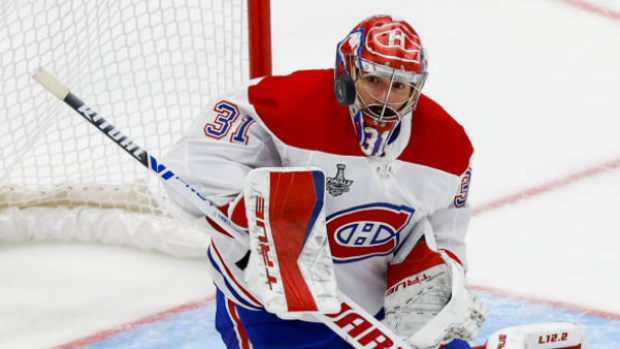 It’s basically Christmas if you’re a Seattle Kraken fan, and you can’t wait to see what appears under the Christmas tree tomorrow. Ron Francis is Santa. Okay, that’s enough of that reference.

Seattle is preparing to announce their first ever roster through Wednesday’s expansion draft, and already the rumours and stories are swirling all over the place. While many fans and experts believe that Carey Price – although unprotected – will not be selected by the Kraken, Montreal fans still aren’t feeling to comfortable just yet.

Carey Price’s wife Angela may have added to the anxiety a little bit when she shared out a lengthy caption about the Price family’s plan during expansion hours:

As everyone tries to read the tea leaves on the @SeattleKraken’s decision….

Okaaaaaay, so Kelowna… is in B.C., and Seattle is right below B.C. in Washington State…

So it’s approximately a 5.5 hour drive, and some hockey fans took this as a sign that Price was going to be announced as a member of the Kraken. This is definitely an overreaction, seeing as there is basically no way Angela would share an actual plan like that to her Instagram. If you’re solely basing it on her Instagram, even she told Montreal fans not to worry and that it will all make sense soon.

She ALSO followed up her post with an Instagram Story, explaining that the family they are seeing live in the Tri-Cities, over a three-hour drive away from Seattle and where she has family.

On top of all that, sources are telling TSN Hockey insider Pierre LeBrun that Price is not the Kraken's pick.

According to sources, the Kraken did NOT select Carey Price in the expansion draft. He remains property of the Montreal Canadiens@TSNHockey @TheAthletic

For some, it was too late. The conclusions had already been jumped to!

It’s very odd. I don’t think Seattle is taking him, but if they did it would make sense? I can genuinely see it going either way.

I don’t like the contract but if Francis thinks he can make a Price acquisition make sense then I’ll grit my teeth and support it. https://t.co/7BguJ6wNUt

It is about 6 hrs from Kelowna to Seattle

We'll be knowing the truth by this time tomorrow. CP31 to #SeaKraken
😏

Wouldn’t surprise me if he was going to Seattle. Kraken seem to wanna make a show off it