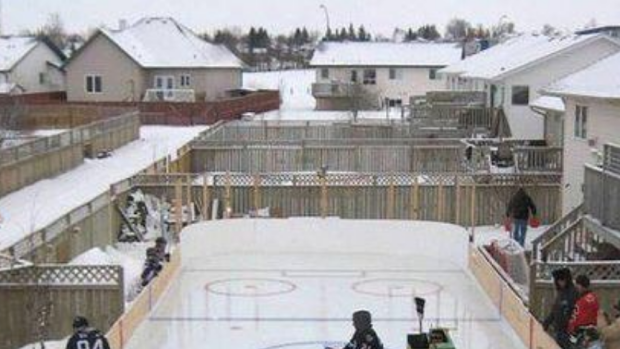 It's the most wonderful time of the year to be a hockey player because the weather is getting colder, snow is starting to fall and outdoor rinks across the country are starting to be used.

There's nothing like playing hockey on an outdoor rink.  Nothing compares to it.  The ice is so crisp, the atmosphere is second to none and even if it's extremely cold out, you don't even feel it.

Now that we're into December, it's time to start highlighting some of the best outdoor rinks out there, and we're going to start with this beauty:

For real, that rink right there is backyard goals.  It's an outdoor rink with every detail of an actual rink an arena, just smaller obviously, and by the looks of it there's quite a bit of room out there.

This is just one of many incredible outdoor rinks we've seen so far, and as the month goes on and the snow continues to fall, we imagine we'll be seeing many, many more.

Be sure to send us pictures of your outdoor rink and they could be featured in a post in the future like these ones:

Almost 3 years ago, this was our field of dreams. Time to start sending in your backyard rinks pics. pic.twitter.com/FQP3M6xOKZ

Calgary with plus temperatures. Still got the ODR. Just finished a morning flood. pic.twitter.com/nXebPzeXLc

I sent mine last week. Thunder Bay is always ahead of the rink curve. Boys out this morning.... pic.twitter.com/r9R9iZJq8A

A little early for this year, but one of my faves from two winters ago. pic.twitter.com/kSheptR4Gd