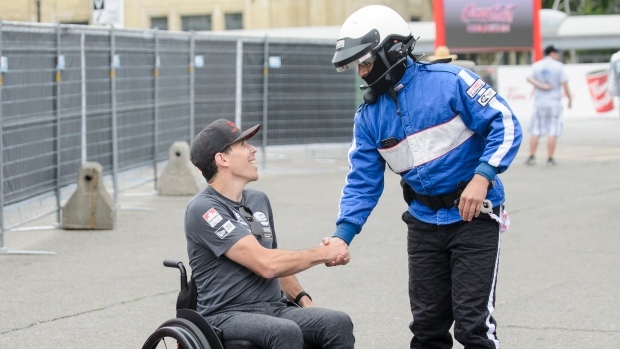 Injured in a crash last August that caused a spinal cord injury forcing him into a wheelchair, the Toronto native got to sit in a race car in his hometown on Sunday.

Although it wasn't the official return to racing, it was the first time on a track since the crash, as he was on hand to take a parade lap in a $160,000 Acura NSX modified with hand controls that allowed him to operate it in front of thousands of spectators.

🇨🇦 racer #RobertWickens, who suffered a spinal cord injury and is in a wheelchair, took an emotional parade lap at the #TorontoIndy with his fiancé by his side. 🙏💑 • (🎥: YouTube/MotorSports on NBC)

"I am over the moon with how crazy this is," Wickens told reporters. "This is just incredible. The support I've received the last 11 months is unbelievable."

What made the moment even more special was that Wickens was accompanied by his fiance, Karli Woods.

"We've been through so much together, it's only fitting we do this together," he said of the parade lap.

If you're looking for inspiration, @RobertWickens is inspiration personified.

At the @HondaIndy Toronto, he's driving a hand-controlled car as he's determined to eventually get back behind the wheel to race again. pic.twitter.com/Ij3CEs2OD2

Is it wrong that I’m crying watching @robertwickens run around the track? #inspirational @IndyCaronNBC

Wickens then gave the signature, "start your engines" speech to kick-off the Indy.

James Hinchcliffe on how special it was to see Robert Wickens in a car today and his experience in his home race #indyTO pic.twitter.com/ffNn0i1Uaf

Simon Pagenaud may have won the race, but Wickens stole the show. Fellow Canadian James Hinchcliffe, who made his own miraculous return to racing after a scary incident, finished sixth.