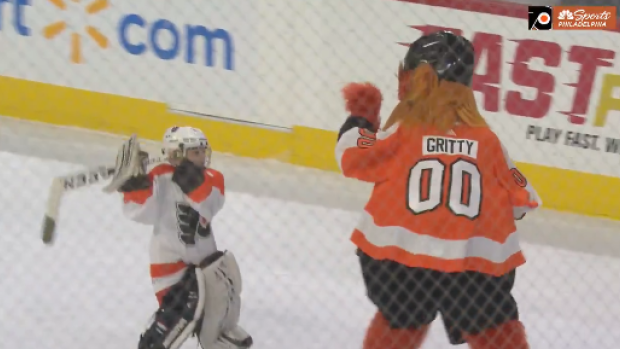 For far too long now, Gritty has wreaked havoc on his nearly anyone who has come in contact with him.

Whether you're a Flyers fan or not, nobody is safe from the orange fury fella who doubles as a walking nightmare and the Philadelphia Flyers mascot.

During an intermission in their game against the Toronto Maple Leafs, the Flyers welcomed the 'Mites On Ice' and that's where Gritty finally met his match.

Bless you, young goalie, or is that just a mini Ron Hextall?

Finally, someone holds @grittynhl accountable for his actions. 😂 • (🎥: @nbcsphilly)

Considering how Gritty treats the refs, you know that little guy won't be getting a slashing call.

If the Flyers ever want to turn back the clock and go back to the days of Hextall swinging his stick around viciously, they should consider signing this goaltender going forward. Now imagine that young duo in net with Carter Hart holding down the fort!

The young mite players saw the hometown Flyers walk away with a 5-4 shootout win, with Hart backstopping the team with 39 saves and was perf