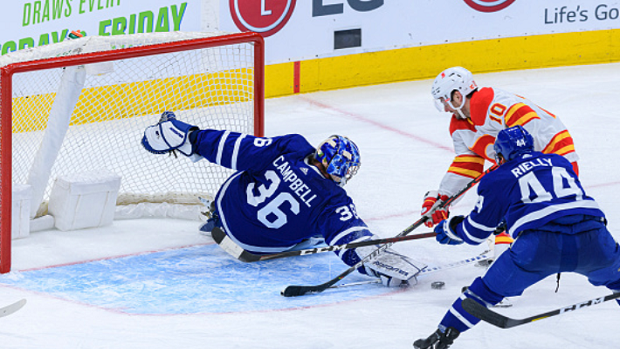 Jack Campbell has been nothing but impressive since he was acquired by the Toronto Maple Leafs, so you can bet Leafs fans were happy to see him back between the pipes on Saturday night.

Campbell was sidelined for nearly a month due to an injury, but he picked up right where he left on as he picked up his 4th win of the season and second consecutive shutout.

28-save shut out for Jack Campbell
First consecutive shut out performances for Campbell in his career.

Posting a shutout in today’s NHL isn’t easy, and to do it multiple games in a row is even more impressive. But if Campbell can find a way to put up one more shutout in his next start, he’ll join a very exclusive list.

Jack Campbell has a shutout in each of his last two appearances. @MapleLeafs goalies with three straight shutouts (reg. season or playoffs):

It’s a feat that’s only been accomplished by three goalies in franchise history, but it hasn’t happened in more than 70 years, showing how special and impressive the feat truly is.

Matthews & Marner had a hug & some words for Campbell

Jack: "It meant a lot. They're proud of my battling thru adversity. It's been a long road & tough year with the injury. Those guys mean the world to me & I look up to them. It makes me more motivated to play well next game." https://t.co/heSKYbLViK

Campbell owns a 4-0 record with a 1.00 GAA and a .965 save percentage this season, and with Andersen apparently dealing with a lingering injury we may just see more of Campbell going forward.