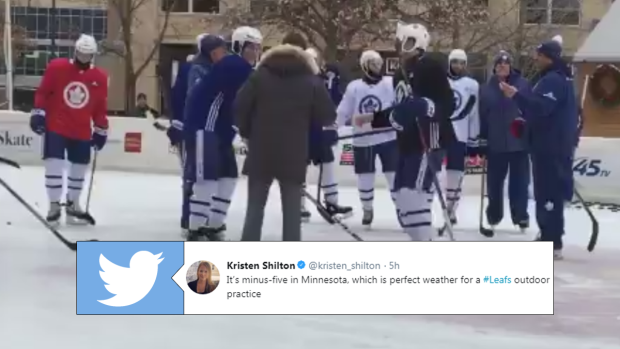 The Toronto Maple Leafs are in Minnesota this week to take on the Wild and on an off day, they were hit with the perfect weather to practice outside.

Despite a tough loss last night, the team decided to have some fun as well. They organized what they’re calling “The Six Tournament”, because Jake Gardiner’s is from Minnesota originally and apparently they call him Six because his number adds up to six.

Gardiner’s father was also on hand to do the ceremonial puck drop.

#Lefas have four squads playing against each other. I’m assuming there’s a trophy involved. Mr. Gardiner on hand for the ceremonial puck drop pic.twitter.com/cASNYIQu0R

In the end, the team including Nazem Kadri, Morgan Rielly, Connor Brown and Kasperi Kapanen ending up taking home the trophy. Apparently this was the worst case scenario for Jake Gardiner. For his inaugural hometown tournament, he ended up losing to the worst group possible for him.

Gardiner is especially close with Kadri and Rielly, so to have them on the winning end was worst case scenario.

And of course, there was a trophy. #Leafs black squad takes it home pic.twitter.com/QeBfMabXX9

Jake Gardiner on whether it was an upset that Team Marleau couldn't beat Team Kadri for the re-purposed Squirt trophy: "Yeah. I never like when Naz wins. I was pretty upset. Mo, too. That’s a killer combination."

As rattled as he was that those two one, he clearly had a good time overall.

The first annual “Six Cup” was a success. Brings back some great memories as a kid playing pond hockey. #coachjohn