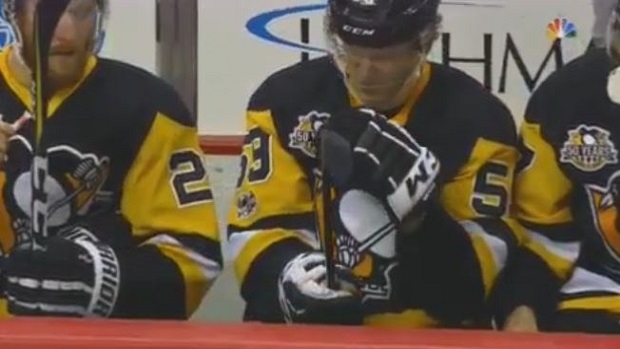 Evgeni Malkin, Sidney Crosby and Phil Kessel have done a good job carrying their weight for the Pittsburgh Penguins this postseason.

They’re all averaging more than a point per game throughout the playoffs and have brought the Penguins to within one victory of advancing to the Stanley Cup final.

Aside from the team’s big three, one player has really stepped up for the Pens this year and has shocked the hockey community with his offensive production.

Rookie Jake Guentzel was a nice surprise for the team during the season, finishing with 16 goals and 33 points in 40 games. He's also managed to carry his offensive production into the postseason and has 9 goals and 16 points in 17 games.

The 22-year-old hasn’t really had any problems adjusting to the NHL life through his first 57 career NHL games, but he experienced something on during his team’s blowout victory over the Ottawa Senators in Game 5 on Sunday that he wasn’t a fan of.

Guenztel needed a little pick-me-up during the game and that’s when Pens winger Scott Wilson stepped in with the smelling salts.

Clearly the Penguins’ rookie sensation was not feeling the smelling salts and will probably think of an alternative option to turn to down the road.