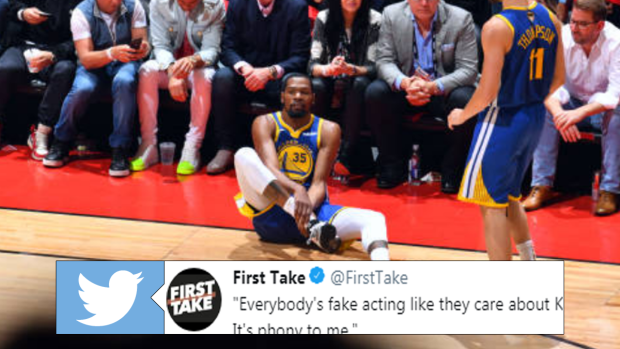 Kevin Durant suffered what may turn out to be a career-altering Achilles injury. Returning from a right calf injury, it didn’t take long for KD to hit the deck again, this time with a hampering even worse than before. It is believed that the his right Achilles tore.

The injury could take somewhere around 12 months to recover from. Even then, he may not have as much spring in his step. While the discussion has gone down a number of different avenues, one of the most controversial is whether KD should have played at all.

Jalen Rose has consistently said he doesn’t believe KD should play, and after the injury happened he wasted no time in calling out all those that are “acting like they care about KD’s best interest”.

"Everybody's fake acting like they care about KD's best interest when they don't. It's phony to me."

People will bring flowers to your funeral, but won’t bring soup when you’re sick.

It’s tough to know where to place blame. After the game, a teary eyed Bob Meyers explained that he didn’t think it was anyone’s fault.

Rose may disagree with the Warriors President of Basketball Operations on that one.