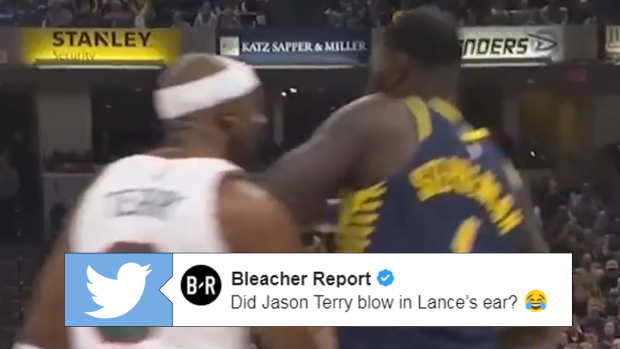 Lance Stephenson, who has fashioned a career in the NBA by consistently doing the most, is probably best known for the time he blew in LeBron James’ ear. It is, with no disrespect intended, a career-defining meme.

Jason Terry knows. After getting the drop on Stephenson and scoring on a three-point attempt over his contest in Monday’s game between the Milwaukee Bucks and Indiana Pacers, Terry swooped on in to give Stephenson some of his own treatment:

Even at the age of 40, Terry is still a savage. This may come as a shock to some casual viewers of the NBA, particularly those who search ‘Jason Terry’ on the Internet only to be misled:

The disrespect will come for anyone, and Stephenson, usually the one to clown on others, was instead a target tonight. The smart money is still probably on him to fire back at some point with, like, some kind of weirdo streetball move.

Who else didnt know Jason Terry was still in the NBA? https://t.co/wCu83oILzK

JET and Lance Stephenson talking to each other pic.twitter.com/umd8dKSc1q