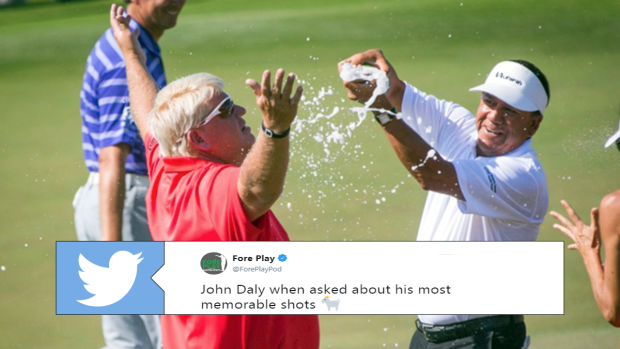 John Daly is a living legend that we simply don’t deserve.

After this video, there’s a good chance you’ll agree with us. Daly, who once admitted he drunk five beers during a round at the L.A. Open, is playing in the Dick’s Sporting Goods Open this weekend. Depending on who you ask, he’s arguably known more for his drinking and smoking than his golfing skills

On Friday, one of the media members asked Daly a question about what his toughest “shots” he’s ever had to do out on the course.

Except the shots he was referring to were of the alcohol variety, not the ones you take on the fairway. Have a listen.

John Daly when asked about his most memorable shots 🐐 pic.twitter.com/9VVPVeX3TT

That’s right, Daly dummied some guy by downing five shots of Jack Daniels before he could finish his second for $200.

Remember when Arnold Palmer got his own drink? John Daly now has his own, too.

Remember when Arnold Palmer got his own drink? John Daly now has his own, too.

My official drink is finally here!! If you're gonna enjoy a John Daly's @johndalyhit make sure it's the real deal! Tested, Retested and mixed just right--be careful though 1 just isn't enough! Check out where to grab one near you they're selling out fast! Great for the course or just & on the go! Lemme know how you like 'em...they're better than good! 😜 🙌⛳️🏌️♀️🍻🏆👊 www.johndalys.com/find Liquor & CStore near you!! #hardlyboring #gripitandsipit #johndalys #8percent 🥊 #fore