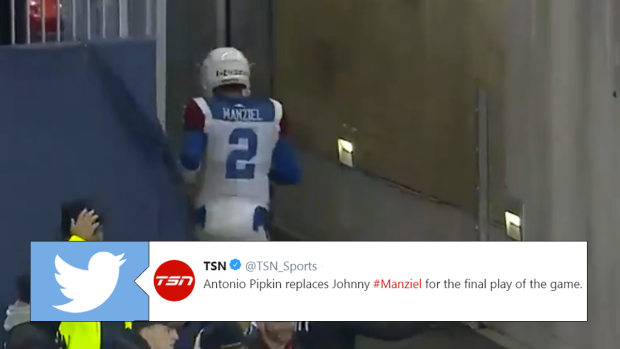 Johnny Manziel has been making strides in his first season as a CFLer. While he’s beginning to look more comfortable, it’s tough playing on a Montreal Alouettes team that isn’t doing him many favours, and Johnny Football still remains without a win as a starter.

He’s come OH so close, though.

Saturday’s loss to the Toronto Argonauts was likely a little extra frustrating for #2. Not only did it come against a beatable Argos team that were on a seven game losing streak, Manziel got substituted for the final play of the game in favour of Antonio Pipkin. The substitution was likely due to arm strength, but it resulted in Pipkin looking very flat footed, and eventually concluding in a game-ending sack.

Manziel didn’t stick around for very long after that, instead choosing to head straight to the locker rooms

Antonio Pipkin replaces Johnny #Manziel for the final play of the game. After the @TorontoArgos ended the game with a sack, Johnny #Manziel immediately ran off the field.#CFLGameDay pic.twitter.com/YYYpXAQo8c

Probably not a good look for Manziel, as the quick exit could be taken as a protest to the coach’s decision to use Pipkin. Still, you have to wonder about that decision in the first place. Seems like a strange call to throw a cold quarterback onto the field for the crucial final play.

Manziel on being pulled for Pipkin on #AlsMTL Hail Mary attempt
-Manziel heard Pipkin’s name called, and ran off the field
-Manziel said it was a play he didn’t run well against Stamps
-When pressed about arm strength, Manziel said flatly “This isn’t the story of the game” #CFL

The frustration is showing, but it may be for a good reason.