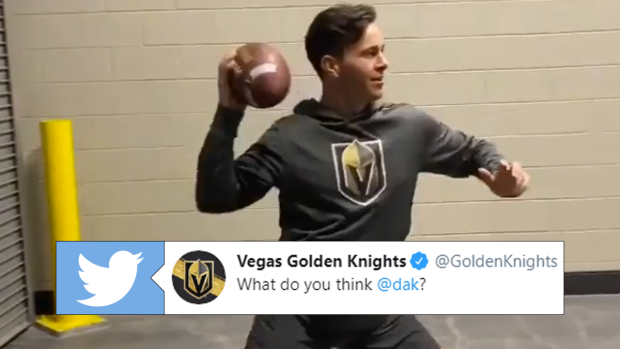 Dak Prescott went viral a week ago when his very unique warm-up routine had people laughing it up. While not all warmups look that great, this one looked amazing. In fact, it almost looked like a dance move.

The dance that's sweeping the nation is back for Week 11!

Do your thing @Dak 🕺🏼 pic.twitter.com/o7Nsd7mcTS

While it may seem like routine warmup to Prescott and other quarterbacks, it struck a nerve with the internet that couldn’t help but meme the heck out of him. It became so widespread that even running back Ezekiel Elliott decided to pay tribute on Sunday.

He wasn’t the only one, though! Vegas Golden Knights forward Jonathan Marchessault also decided to pay homage with a little hip wiggling of his own.

What do you think @dak? pic.twitter.com/31bTPNbaYl

Woah, is that Marchy… or Shakira? Marchessauly added a little extra spice to his version of the now-viral dance, and we’re thinking it may JUST be the best one yet.