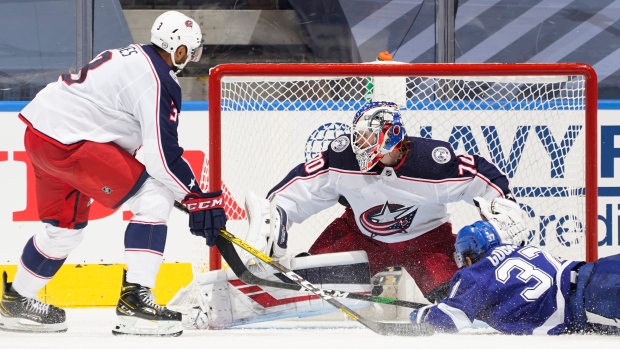 In an absolute marathon of a first-round Game 1, the Columbus Blue Jackets took the Tampa Bay Lightning all the way to five overtimes — good for the fourth-longest game in NHL history — before Brayden Point finally ended things.

They needed to go to a 5th overtime period, but the Tampa Bay #Lightning take a 1-0 series lead!

In a game of that length, you knew there were going to be some absurd statistics that would hop off the page. Joonas Korpisalo and Seth Jones both achieved some ridiculous numbers, good for new NHL records: shots against (88) and saves (85) for Korpisalo, time on ice for Seth Jones (65:06).

Unfortunately, all that effort went to waste in a loss. Seth Jones didn’t play a regulation game’s worth of hockey for this!

New NHL records for Joonas Korpisalo and Seth Jones, but it came in a Blue Jackets loss 😬

Just watching that game was a huge time commitment, much less actually playing in it. Make no mistake, the hockey world was impressed by Jones and Korpisalo’s efforts, but also feeling the sting for them that they’re still staring at a 1-0 series deficit for it.

It's been an absolute privilege to watch these two goalies play today / tonight.

joonas korpisalo and seth jones in the locker room finding out that they broke nhl records and yet they somehow lost pic.twitter.com/Fir4rmEbpG

I’m pissed I didn’t get to use this. #CBJ #Korpisalo pic.twitter.com/a52JVuaY3L