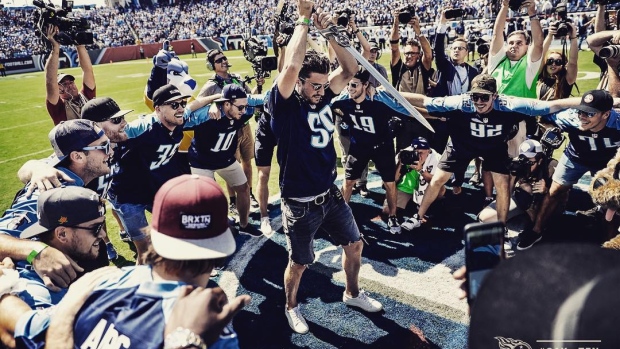 Throughout the Nashville Predators 2017 NHL Playoff run, the Tennessee Titans showed them a lot of support. They attended games, crushed tallboys, swung catfish and even ripped off their shirts.

A significant portion of the Predators roster was in attendance at the Titans’ season opener and they came out to plant the sword in the 12th man stunt that they often perform before home games. Roman Josi was the lucky man to wield the sword and plant it into the ground and it clearly sent shockwaves as his teammates were sent flying.

The boys are back together. Thanks for having us @titans

Subban recorded the other angle of the moment, so you can see him go flying from his point of view.

@predsnhl the band is back together! #titanup @titans

Subban is no stranger to this event either, because he was lucky enough to plant the sword himself last season. He also ripped off his shirt after planting the sword into the crowd.