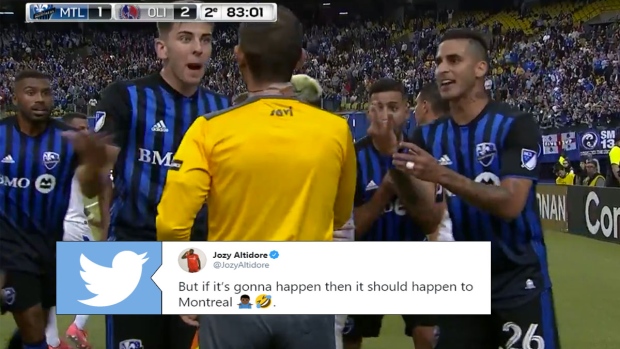 The Montreal Impact fell short against C.D. Olimpia of Honduras in the opening leg of the CONCACAF Champions League quarterfinal on Tuesday.

Trailing 2-1 late in the second half, the Impact got a glorious opportunity to even the game, or so they thought, after the ball struck an opponent’s arm inside the box. However, there was no call on the play by the officials, robbing the Impact of a penalty kick.

Highlights of our 2-1 loss against Club Olimpia in the Concacaf Champions League. #SCCL2020 #IMFC pic.twitter.com/WPsVmYnkqS

Everyone in an Impact uniform and on the sidelines completely lost it when the call wasn’t made, but fans and players from other MLS teams got a kick out of it; especially Toronto FC forward Jozy Altidore.

But if it’s gonna happen then it should happen to Montreal 🤷🏿‍♂️🤣.

Altidore couldn’t help but take a shot at the Impact on Twitter and had a laugh at their expense, and this all comes nearly one week after he mentioned how much he loves watching the Impact get scored on while he was guest hosting SportsCentre.

Leg 2 will go down next Tuesday. ​