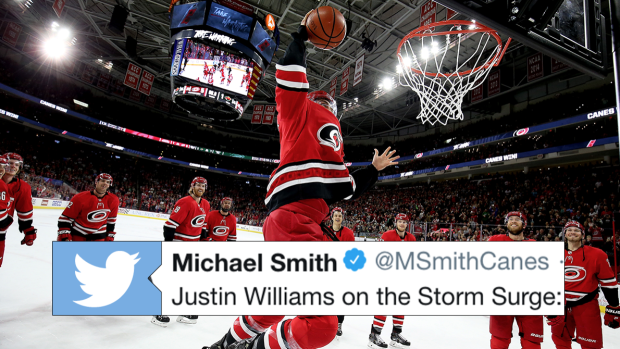 On Thursday, Justin Williams tweeted that their game against the Capitals would be the last time the Hurricanes would do the "Storm Surge" this season.  For those unfamiliar with what that is, watch the video below.

After each home win, the Hurricanes would do an elaborate, entertaining, and amazing celebration in front of their fans.  Not everyone was a fan of the Storm Surge, but most were and it's pretty disappointing it won't be back for the season.

Will it be back for the playoffs, though?  Based on what Williams had to say Friday, there's a chance...

Justin Williams on the Storm Surge: "You never know when they're going to come. They're unpredictable."

Added that the #Canes are a one-focus team with just five games left in the regular season.

Insert eyes emoji here.  The Hurricanes are one point up on the Blue Jackets and Canadiens for the top Wild Card spot in the East and with 5 games to go, as Williams said the focus is on winning to make it to the playoffs.

If they do make the postseason, we'd love to see the Storm Surge back and better than ever because that building will be rocking even more than it is now.

We believe this is called victory fishing. 🐟 #StormSurge pic.twitter.com/JVMwkJ2CVP