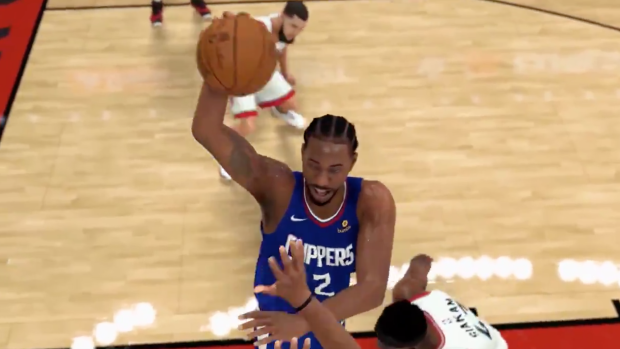 Toronto Raptors fans were living a dream up until July 6th, that is until Kawhi Leonard woke everyone up in the worst way imaginable.  The former Raptor decided to take his talents to the Clippers and now, it feels like Toronto has escaped the minds of basketball fans despite being the reigning champs.

Thursday, NBA 2K20 dropped their new gameplay trailer and it ties into the feeling of the Raptors being forgotten perfectly because the ONLY clip of Toronto in the trailer was Kawhi dunking on a Raptors player in "The 6ix."

The Next is Now 😤 2K20 Gameplay is here with familiar faces in new places. Experience #NBA2K20 for the first time on 2K Day 9/6!

Not a ton of respect for the NBA champs and fans took notice of their team's complete non-existence in the trailer.

Can’t even show the raptors in your new trailer? You know... the 2019 NBA champions

Why is this trailer a joke?

Not a single Denver Nugget or Toronto Raptor was shown in this trailer https://t.co/YeUUCZeaSS

Only spot I saw with the Raptors in the NBA 2k20 trailer? Kawhi dunking on the Raptors 😅 https://t.co/5PvOMrS7Om

That's cold, but Raptors fans are used to the cold and the disrespect.  Kawhi is gone, but Toronto is loaded with talent and the league is more wide-open now than it has been in a long time.  Sleep on the Raps if you'd like, but do so at your own risk.

🏀🎴 #NBA win totals for next season are up.