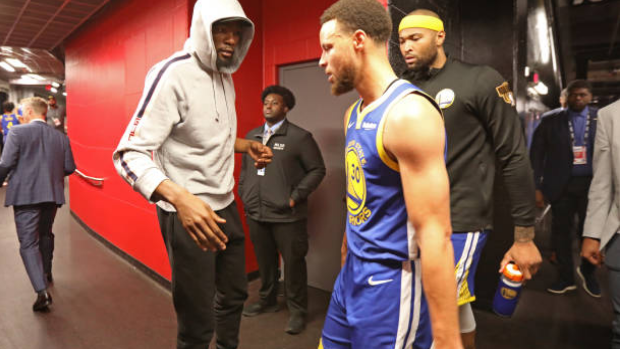 Seeing your teammates lose in front of your own eyes is surely a horrible feeling.

Seeing them go down 2-1 and hoping that you can come back in time before the series is over is likely a thought that has crossed Kevin Durant's mind following the Warriors' Game 3 loss to the Raps in the NBA Finals.

Durant, who hasn't played since Game 5 of the Western Conference semi-finals against the Houston Rockets, was shown prior to Game 3 giving Steph Curry a pep talk.

Curry went off and established a career-high of 47 points in the loss, as well as setting a NBA Finals record with the most points ever recorded in a home loss.

But as the final horn went off, the Warriors walked back to the dressing room with more questions than answers, and once again, Durant was right there, this time greeting his discouraged teammates.

KD was there to greet his guys in the tunnel following the Warriors' Game 3 loss. pic.twitter.com/CPzCgGcVLV

He's not sitting on the bench with the team so it only makes sense he's there to meet them immediately after the game is over, and so is Klay Thompson.

Klay itching to get in pic.twitter.com/xZGkdH3ASB

If the Warriors hope to even up the series, they're going to need at least one of Thompson or Durant to play in Game 4 on Friday.