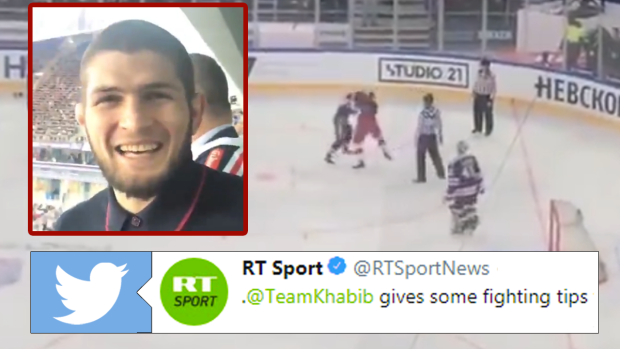 The Russian fighting machine beat up the Irish fighter, satisfying many of those that had gotten tired of McGregor’s antics. As a result, Khabib took home the Lightweight belt and is still the reigning undisputed champion in the division.

The man loves to fight, and has been doing so ever since he was a child (surely you’ve seen him wrestling that baby bear by now), so it’s not surprising that he was supremely entertained when a fight broke out during a hockey game he was attending.

Khabib is doing pretty well as a UFC fighter, but if that ever goes downhill for him maybe he can strap on the skates a pursue a different career. We’re pretty sure the opposition would stay in check if this guy was suited up as an enforcer!