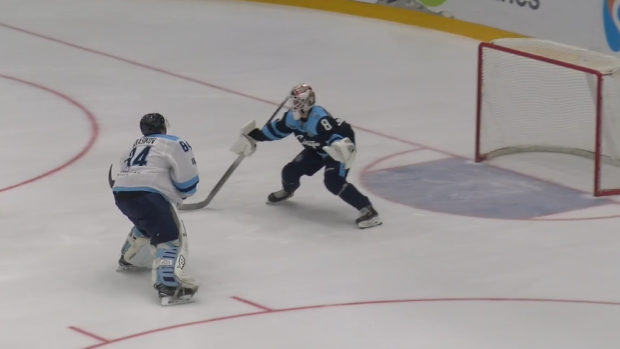 We’re only ten days away from the return of hockey.

KHL hockey that is. Yes, Russia’s top league will kick off on Saturday, September 1st, when AK Bars Kazan and clashes with the mighty SKA Saint Petersburg.

With games just right around the corner, teams are in training camp mode. For HC Sibir Novosibirsk, the team recently held a skills competition for its fans to take in the players doing some fun exercises out on the ice as a part of a promotion to build hype ahead of the season.

22-year-old goaltender Alexei Krasikov traded in his goalie stick for a player’s twig and got to show off his silky, lacrosse-style mitts as he went in on his fellow crease companion for a one-on-one shootout.

Pretty impressive if that’s actually real, but you never know over in the KHL. If you look closely, you can see the puck seems to be almost stuck to the blade before Krasikov flings it in after doing a couple of around-the-world moves.

On a related note, Krasikov has a pretty sick Deadpool-bucket he’ll be sporting for HC Sibir this season. As good as Krasikov is with the puck on his stick, he’s even better at stopping it, as his .939 save percentage last season was the second highest in the entire KHL.

#Deadpool will help Alexei Krasikov in the net this season. pic.twitter.com/jJ9UIr4pxc

You can watch the full skills comp below.